After being diagnosed with Late Onset Tay-Sachs disease, Katie Buryk and her family established a fund to raise money for research for a cure. In under 4 years, support for the cause has raised enough funds to finance seven Research Grants. Here is their story.

It has been eight years since I began trying to find out what’s wrong.

I first noticed in college I had trouble climbing stairs. Since then my leg muscles have gotten weaker and weaker. Everyday tasks have grown harder, whether dressing myself or getting up from a sitting position. Now I can’t take the subway or wear high heels.

Sometimes I fall when I’m walking. My legs just give out. And at times, some people can’t understand what I’m saying. It is scary. I expected to be spending my 20s having fun, meeting boys and beginning a career. Instead I’ve spent my time in pursuit of an answer. What’s the matter with me? I visited multiple neurologists. I underwent tests at a series of New York hospitals. I went to the Mayo Clinic. Finally, a good friend of my mom’s suggested genome sequencing for my entire family. We arranged that and heartbreakingly, now we finally know. I have a rare disorder called Late Onset Tay-Sachs disease. So does my twin sister. My Mom and Dad are carriers and never suspected they had the recessive geneOften referred to as the "unit of heredity." A gene is composed of a sequence of DNA required to produce a functional protein.. We’re among the fewer than 100 cases reported worldwide according to the National Tay-Sachs & Allied Diseases Association (NTSAD).

Why we started the fund

Our bodies don’t produce enough of an enzymeAccording to Genome.gov, an enzyme is a biological catalyst and is almost always a protein. It speeds up the rate of a specific chemical reaction in the cell. The enzyme is not destroyed during the reaction and is used over and over. More which, right now, has no replacement. Infants who develop symptoms early usually die by age 2. Juveniles with symptoms pass away in their teens. So I guess we’re lucky that at my age, we are still alive. But the disease’s progression will continue. And I have to ponder a future where swallowing might prove difficult and my mobility will be via a wheelchair. I may face a cognitive decline and mental illness.

How the funds raised will be used

There isn’t much money to finance a search for a cure and there’s no celebrity who leads telethons. It seems that pharmaceutical companies don’t want to invest in a drug for a cure. Maybe there aren’t enough of us to make it a profitable investment. I guess that means it’s up to me.

I have decided to go public and try to raise money, awareness and mount a search for a cure. Sure it’s for me and Allie, but it is also for infants and kids who aren’t as lucky as we are. And it’s for the families who have to embark on this difficult, sad and baffling journey. I will be giving regular posts updating my Facebook friend network about our progress. Every dollar donated will go into a family fund that is completely dedicated to research a cure. Research will cost far more and we are hoping to get the attention of the National Institutes of Health and possibly pharmaceutical companies to help with this cause.

So please help and do what you can. I know we have your love and support and we appreciate it. Whatever your contribution will go to making a difference in our lives and so many other children’s lives. It offers hope.

Where are we today?

Back to Fund Listings 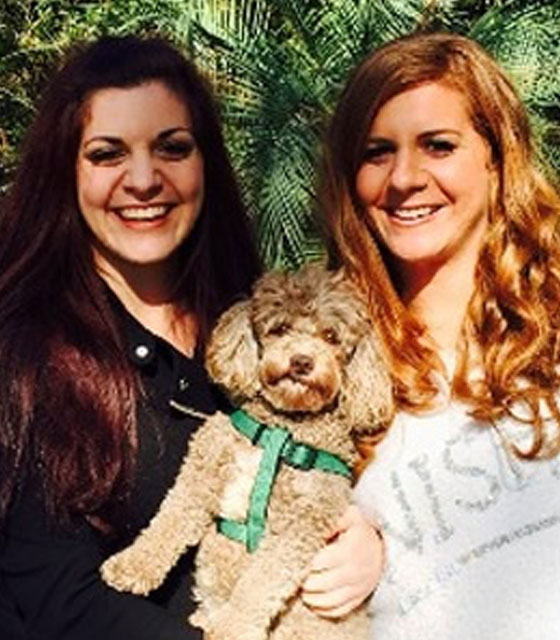 Click below to make a gift with your credit card.

This project aims to develop a both a clinical registry and a repository of samples for Late Onset GM2 Gangliosidoses. The registry will use the NeuroBANK platform to create and implement use of electronic case report forms, allowing standardized data to be collected from patients with LOTS. Review of current medical literature and surveys of patients will help determine which data to include in the registry in order to establish meaningful outcome measures. Prospective evaluations of patients will also be used to determine these optimal outcome measures, looking at change over time, patient value of measures, and variability among patients. Samples collected will be used to identify potential biomarkersA measurable substance in an organism whose presence is indicative of some phenomenon such as disease, infection, or environmental exposure. of disease progression and to correlate these biomarkers with clinical outcomes. Both clinical outcome measures and biomarkers are essential components of clinical trial readiness, necessary to show effect of any experimental therapy.

This project supports the development of a mouse modelA laboratory mouse useful for medical research because it has specific characteristics that resemble a human disease or disorder. Strains of mice having natural mutations similar to human ones may serve as models of such conditions. Scientists can also create mouse models by transferring new genes into mice or by inactivating certain existing genes in them. Definition from: National Human Genome Research Institute (http://www.genome.gov/glossary.cfm) for Late Onset Tay Sachs and Sandhoff diseases. Mice with Sandhoff disease are used to study both diseases because both store GM2 gangliosides and because mice with mutations in the HEXA gene which causes TSD do not develop features of TSD due to an alternate pathway for GM2 degradation. This model is different from currently existing SD mouse models in that it has a specific mutationA change in the sequence of DNA. Many mutations are "silent" and do not cause disease. When mutations occur in genes and disrupt the production of a functional protein, they may lead to genetic disease. that leads to residual enzyme, as is seen in the late onset forms of these diseases in humans. This new model will be used to study pharmacological chaperones, small molecules that can bind and stabilize mutated enzyme. This allows the misfolded enzyme to reach the lysosome and degrade stored material correctly. The two chaperones that will be studied have been previously shown to increase both HexA and HexB enzyme in healthy mice. The project will look for increased enzyme activity and reduced gangliosideAny of a group of glycolipids that yield a hexose sugar on hydrolysis and are found especially in the plasma membrane of cells of the gray matter. Definition from: Merriam-Webster's Medical Dictionary http://www.m-w.com/ by Merriam-Webster Inc. storage in the brain. The mouse model will also be made available for other late onset research.

The drug Miglustat (approved for Gaucher disease in 2002) does not cross the blood-brain barrier to an extent that could mediate benefit in a clinical trial in patients with late onset Tay-Sachs disease. In this study, they are using a powerful drug discovery approach to identify FDA approved drugs that have improved brain penetrance while simultaneously share the same efficacy as Miglustat.

They have submitted 49 samples to the University of Iowa, Genomics division for high-throughput RNA-sequencing. These samples represent 7 donors treated with the three drug treatments and controls at two different doses.

Next Steps: They will query the LINCS database with the RNA-seq data, identify drugs and validate hits over the next 4-6 months. Importance: These important preliminary studies will help identify additional, brain penetrable drugs that may find use in substrateThe substance on which an enzyme acts. reduction therapy for the gangliosidoses.

This proposal is a next step in identifying relevant outcome measures for clinical trials. Considerable data on the late onset Tay-Sachs (LOTS) and Sandhoff (LOSD) patients has recently been collected at two sites (Massachusetts General Hospital and the NIH Clinical Center) as well as the last two NTSAD Annual Family Conferences and this exploratory study would expand the range of outcomes to metrics relevant to the daily lives of LOTS and LOSD adults, including their ability to move about and participate in the activities of daily living.

This is a 6 month exploratory study using 5-8 ambulatory or partially ambulatory adult patients with late onset Tay-Sachs or Sandhoff disease to collect patient data on ambulation, falls, and wake/sleep cycles and other patient input that can be tested as clinically relevant outcome measures for future clinical trials. Data is collected through a wearable device and transmitted through a mobile app to Dr. Tifft for analysis. The data collected will be compared to clinical testing including gait lab metrics to be conducted at the NIH Clinical Center at the time of initial evaluation and at the 6 month endpoint.

While intracranial injection of AAV vectors is the most advanced gene therapy for Tay-Sachs and Sandhoff diseases, the current approach involves two vectors encoding separately the hexosaminidase ATay-Sachs is caused by a mutation in the HEXA gene on chromosome 15. The HEXA gene codes for the alpha subunit of the hexosaminidase A enzyme which is necessary for breaking down GM2 gangliosides in nerve cells. When there is a mutation in the coding for alpha subunit of the hexosaminidase A it does not function properly and leads to an accumulation of GM2 which is toxic and eventually causes cell death. Sandhoff is characterized by loss of function of both the alpha and beta subunit of hexosaminidase A enzyme. For more information visit: http://ghr.nlm.nih.gov/gene=hexa (HexA) alpha- and beta-subunits, which are injected bilaterally in the thalamus and one cerebral lateral ventricle. There are drawbacks to this approach, such as the invasiveness of direct injections into the brain that require a neurosurgical procedure, and its use of two AAV vectors which double the costs of manufacturing and an eventual treatment. After much initial work, there are now single AAV vectors carrying both subunits that show promising results in GM2 mice. These new vectors can enter the brain effectively after injection into the bloodstream, or injection into the cerebral spinal fluid (CSF). Presently it is unknown which approach will be the most effective and therefore it is important to test both.

Goals of the Proposal

Gene therapy, is one of the most promising treatment options in development. The study will evaluate the efficacy and biodistribution of the state-of-the-art gene therapy in TSD sheep. Tay-Sachs sheep is one of the most relevant animal models of the disease, due to its large brain size and suitability for various biomarker studies.

The findings in this proposal will aid in expanding our knowledge on the treatment’s administration and biodistribution. The efficacy profile from the work with be necessary and helpful for future regulatory application before FDA. Most importantly, this study will generate useful data and insight about TSD biomarkers and contribute to future clinical studies in human patients.

Thank you from the bottom of our hearts for your support!

National Tay-Sachs & Allied Diseases Association (NTSAD) leads the worldwide fight to treat and cure Tay-Sachs, Canavan, GM1, and Sandhoff diseases by driving research, forging collaboration, and fostering community. Supporting families is the center of everything we do.

The content of this website is intended for informational purposes only and not intended to be a substitute for professional medical advice, diagnosis, or treatment.

The National Tay-Sachs & Allied Diseases Association (NTSAD) leads the worldwide fight to treat and cure Tay-Sachs, Canavan, GM1, and Sandhoff diseases by driving research, forging collaboration, and fostering community. Supporting families is the center of everything we do.

Get the latest news from NTSAD about our Community, the research that provides hope, and what is happening in the world of rare disease.

Please use this form to submit your feedback on this page. You can submit each modification separately or you can submit them all at once.